“There is so much injustice in this country, the police are under-paid and have not learnt any lesson from #EndSARS….” These were the last words of a Canadian-based protester, Patriot Patrick Eholor, yesterday, while speaking with journalists at the Lekki tollgate in Lagos before officers of the Rapid Response Squad (RRS) swarmed on him, removed his cap and whisked him away into a waiting Black Maria.

As over 300 #EndSARS protesters await freedom from several correctional centres a year after, more youths were, yesterday, hounded into custody by the police for daring to observe a memorial of last year’s long-drawn protests, which turned on its head on October 20.

Among those arrested with Eholor include a journalist attached to Legit TV, Bisola Alawode, and a man clad in white and bearing an #EndSARS banner. Alawode said he had misplaced his identity card but had his driver’s license in his car parked nearby. He said the officers hit him after they dragged him by his belt into their parked van.

Also, a PM News reporter, Taiwo Okanlawon, covering the memorial was beaten and harassed by policemen. The policemen had fired teargas at protesters, causing pandemonium. The reporter was doing his job when the police suddenly descended on him.

While speaking with newsmen, Lagos State Commissioner of Police, Hakeem Odumosu, said the journalist was arrested because he had no means of identification despite his claims.

He added the arrested journalist was immediately released when his colleagues showed up to identify him as a member of their crew.

The protest in honour of victims shot last year began with a long convoy of vehicles around 9:00a.m. and was led by popular hip-hop musician, Folarin Falana, aka Falz, and Debo Adebayo, also known as Mr. Macaroni.

They drove through the Lekki tollgate, epicentre of the campaign last year, with Nigerian flags in their hands as they echoed in unison “we will never forget.”

IN Abuja, a protest to mark the first anniversary of the epic #EndSARS movement also held yesterday. Hundreds of protesters bearing placards had stormed the Unity Fountain, Central Area, Abuja and other areas.

The protest was led by human rights lawyers, Pelumi Olajengbesi and Marshall Abubakar; activists, Omoyele Sowore and Deji Adeyanju. They were all dressed in black and chanted solidarity songs before embarking on a march to the National Assembly.

They were, however, stopped by armed security men who mounted barricade at the Ministry of Justice. This led to a face-off between the protesters and policemen on ground.

The angry protesters demanded to speak with the Speaker of the House of Representatives. They, however, returned when they were assured the Speaker would show up. He did not address them till the protest ended.

Sowore said the #EndSARS protests last year was a metaphor that Nigerians were tired of happenings in the country. “We are tired of bad leadership, it is not just about the brutality of the police force. The 2020 protest was the first leg as youths came out to protest against the oppressive regime of President Muhammadu Buhari.”

One year after, over 20 police stations and outposts, which were burnt by hoodlums, who hijacked the #EndSARS protests in different parts of Lagos are yet to be refurbished by the government and police high command.

The Divisional Police Officers (DPOs) and operatives of these divisions are still working under the canopy and makeshift sheds. Sources said this has affected police output and psychology in the metropolis in recent times.

Police spokesman, CP Frank Mba, however, refused to comment when asked on the state of yet-to-be refurbished stations.

ONE year after the Lekki shooting, the Federal Government, yesterday, still claimed the incident was nothing but a “Phantom Massacre.” Minister of Information and Culture, Alhaji Lai Mohammed, who spoke on the first anniversary of #EndSARS protests, described it as the first massacre in the world without blood or bodies.

He expressed concern that despite ample opportunities for families of those allegedly killed and those alleging a massacre to present evidence, there has been none.

“No bodies, no families, no convincing evidence, nothing. Where are the families of those who were reportedly killed at the tollgate? Did they show up at the Judicial Panel of Inquiry? If not, why?

“Sadly, the champions of a massacre at the Lekki Toll Gate, including Amnesty International and CNN, have continued to shamelessly hold on to their unproven stand,” the Minister said.

THE United States Mission to Nigeria in its reaction to the #EndSARS memorial protests, advised protesters to take a political approach to addressing their demands. The Mission disclosed this on its verified Facebook handle yesterday.

“Today is a day to reflect on the loss of life and property during last year’s #EndSARS protests. We appreciate the work done by the various judicial panels and look forward to the implementation of recommendations and compensation to victims of police brutality. We support ongoing police reform efforts. We encourage those who demonstrated for change to engage politically to achieve it,” the post read.

AMNESTY International, however, insists that no one has been brought to justice for torture, violence and killings of peaceful protesters, while reports of human rights violations by the police persist. An investigation by the organisation alleged that security operatives killed at least 12 persons on October 20, 2020, at the Lekki tollgate and Alausa in Lagos.

Amnesty International said it was able to establish that pro-government supporters instigated violence at many of the demonstrations, providing cover for the police to use lethal force against peaceful protesters. The organisation said it also found that detained protesters were tortured and refused or denied immediate access to lawyers.

While judicial panels of inquiry were set up to investigate abuses by officers, AI said that the legal bodies have made little progress. AI also alleged that despite the gravity of the human rights violations, not a single member of the security forces has been prosecuted.

“What we observed at these panels is discouraging and clearly shows there is no real commitment to ensuring justice for victims of police violence across Nigeria. These panels raised hopes of getting justice but in some states, this is quickly vanishing,” said Osai Ojigho, Director of Amnesty International Nigeria.

THE Human Rights Writers Association of Nigeria (HURIWA) has asked the National Assembly to create a national board for the protection of civil protesters to be governed like an independent and totally autonomous body. It also called for the unconditional release from detention of all protesters arrested by police for marking the one year anniversary of #EndSARS. 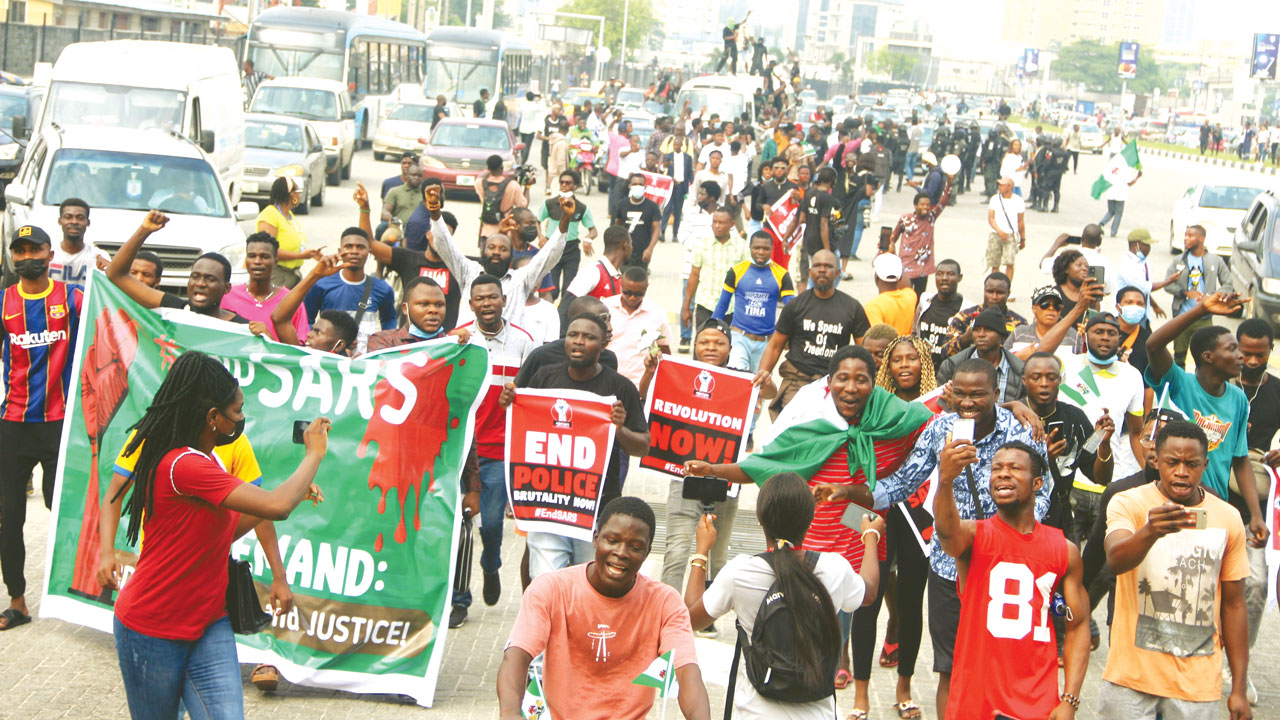 HURIWA, in a statement issued, yesterday, in Abuja, by its National Coordinator, Comrade Emmanuel Onwubiko, described those who participated in the anniversary protests as heroes of constitutionalism, who rather than being victimised, humiliated, harassed or tortured should be awarded national honours of bravery and courageous defence of constitutional democracy and the rule of law.

PRESIDENT of the Nigerian Bar Association (NBA), Olumide Akpata, also called on security agencies to ensure the unconditional release of peaceful protesters and journalists arrested yesterday during the commemoration of the first anniversary of #EndSARS.

In a statement yesterday, he said the arrest of peaceful protesters and journalists on lawful duty showed that the country and its security agencies have not learnt from last year’s experience.

Akpata, who directed the NBA Human Rights Committee to immediately spring into action to ensure the protection of the rights of those arrested, frowned on the failure of the various governments to compensate victims of police brutality, whose petitions have been upheld by the various #EndSARS panels.

LAST year’s nationwide uprising against police brutality has been compared to the June 12 struggle in 1993 that was a catalyst for the Fourth Republic in 1999, Director of International Press Centre (IPC), Lagos State, Lanre Arogundade, has said.

The IPC boss stated this in Lagos, yesterday, at a forum organised by the Action Group on Free Civic Space (AGFCS) to commemorate #EndSARS protests.

Arogundade was reacting to the presentation by Mrs. Victoria Ibezim-Ohaeri of Spaces for Change (S4C) on ‘Use of Digital Technology to Silence Dissent’, while sitting on a panel comprising Okey Nwanguma of Rule of Law and Accountability Project (RULAAC), Lucas Koyejo of the National Human Rights Commission (NHRC), Ngozi Nwosu-Juba of Vision Spring Initiative and Achike Chude of Justice Development and Peace Commission (JDPC).

He said members of the ruling class were churning out draconian laws against freedom of expression because they were feeling insecure, since they were not alive to their responsibilities of catering for the masses. According to him, it is the strategy of the ruling class to keep an army of unemployed youths for selfish political gains.

On the fate of the protesters still languishing in detention, a year after, Koyejo said “the NHRC is interested in the detainees,” but not those on trial for looting and arson. He urged anybody who knows any #EndSARS protester still in detention to bring the name to NHRC for necessary action.

The forum canvassed alternative channels for political power, since “the ruling class is assaulting democratic rights.”

A statement by AGFCS read by Nwosu-Juba noted 435 incidents of crackdown on civic actors and Nigeria’s civic space with vicious attacks directed at freedom of expression, association, and assembly, and most significantly in recent times, media and digital rights.

It reminded the Federal Government that “democratic freedoms are not gifts bestowed on people by illiberal state actors, but fundamental rights guaranteed to every citizen under the constitution.”

ALSO, Access to Justice has lamented that brutality, unlawful detention, extortion is still widespread within the police among other acts of police violence one year after #EndSARS. It said in the face of this failure, citizens’ attempts to remind the government of its promises by the exercise of their rights to freedom of expression was being repressed by the police under various guises.

In a statement yesterday by its convener, Joseph Otteh, and Project Director, ‘Deji Ajare, it reminded the government of its promise to reform the police and to take determined steps to do so now.

“The police force still functions with impunity and lawlessness and there are continuing reports of widespread abuses perpetrated by officers of the force on a daily basis. No institutional and political efforts have been undertaken to transform the operational system of the force in order to address the root problems.

“We strongly urge the government to ensure that the reports of the States Investigative Panels into police violence following the #EndSARS protests are fully implemented, and that victims or families of victims – in cases of unlawful killings- are compensated. Government must also ensure the immediate prosecution of all those indicted by the Panels as having acted unlawfully and abused their offices.”

Buhari says he will retire to his farm after tenure ends June 10, 2021