The country’s top-bottom revenue sharing formula is currently undergoing a review – a process the Chairman of the Revenue Mobilisation Allocation and Fiscal Commission (RMAFC), Dr. Elias Mbam, said would be completed before the end of the year.

That has happened several times but all the previous exercises were botched, leaving the current template unchanged since 1992. In the intervening years, six additional states were created just as the number of local government councils increased by nearly one-quarter, from 589 to 774.

Of course, the increase in the number of political-administrative offices carries with it a disproportionate burden, which has been a subject of intense debate and horse-trading. Yet, the general principle of resource allocation has remained constant.

Mbam said the political changes coupled with the emerging socio-economic challenges are justification for the ongoing review.

“There have been some considerable changes arising from the policy reforms that altered the relative share of responsibilities of various tiers of government, including the controversies over funding of primary education, primary healthcare; inadequate/decaying infrastructure and widespread internal security challenges across the country,” he said during a recent interactive session with journalists.

He pointed out the glaring inability of the vertical formula to “adequately address the apparent mismatch between statutorily assigned functions and tax powers of each of the three levels of government,” noting that there had been agitations from different interest groups calling for a review of the document.

The planned review is not the first in the past few years. Efforts have been made in the past 28 years to evolve a more equitable template to align with changing needs. For instance, a review process had been completed and recommendations made before a Supreme Court ruling of April 5, 2002, which recognised federal, state, and local governments as the beneficiaries of the Federation Account.

That truncated the broad review contemplated in the recommendations.

Before the return of democratic administration in 1999, there was widespread clamour for the review of the revenue-sharing formula created by the military administration.

The campaign was based on the need to give states a bigger part of the cake they were getting while reducing the bogus Federal portion. The court judgment ended the planned adjustment.

In December 2002, a proposal for a new template was presented to President Olusegun Obasanjo. But the bill was among several others that died with the session of the National Assembly that ended in May 2003.

The efforts continued as the civil society organisations also mounted pressure on the government to adjust the document with a public hearing conducted on a new bill in 2006. Yet, the effort could not produce a new guide. In 2014, a fresh attempt was made with considerable success.

The RMAFC Chairman said the organisation is doing things differently to prevent a repeat of the past. “Because of what we have learnt from past efforts, we have decided to first handle the vertical formula, that is the sharing among the federal, states and local governments. This is not among states and local governments and we think that this will be less controversial,” he said.

RMAFC’s current campaign seems to focus on the vertical framework while leaving out the equally controversial horizontal aspect. As currently obtainable, the equality principle takes the largest chunk of the resources with 40 per cent share while population follows with 30 per cent. There could be questions on why population, a flow variable, should take as much as 30 per cent. 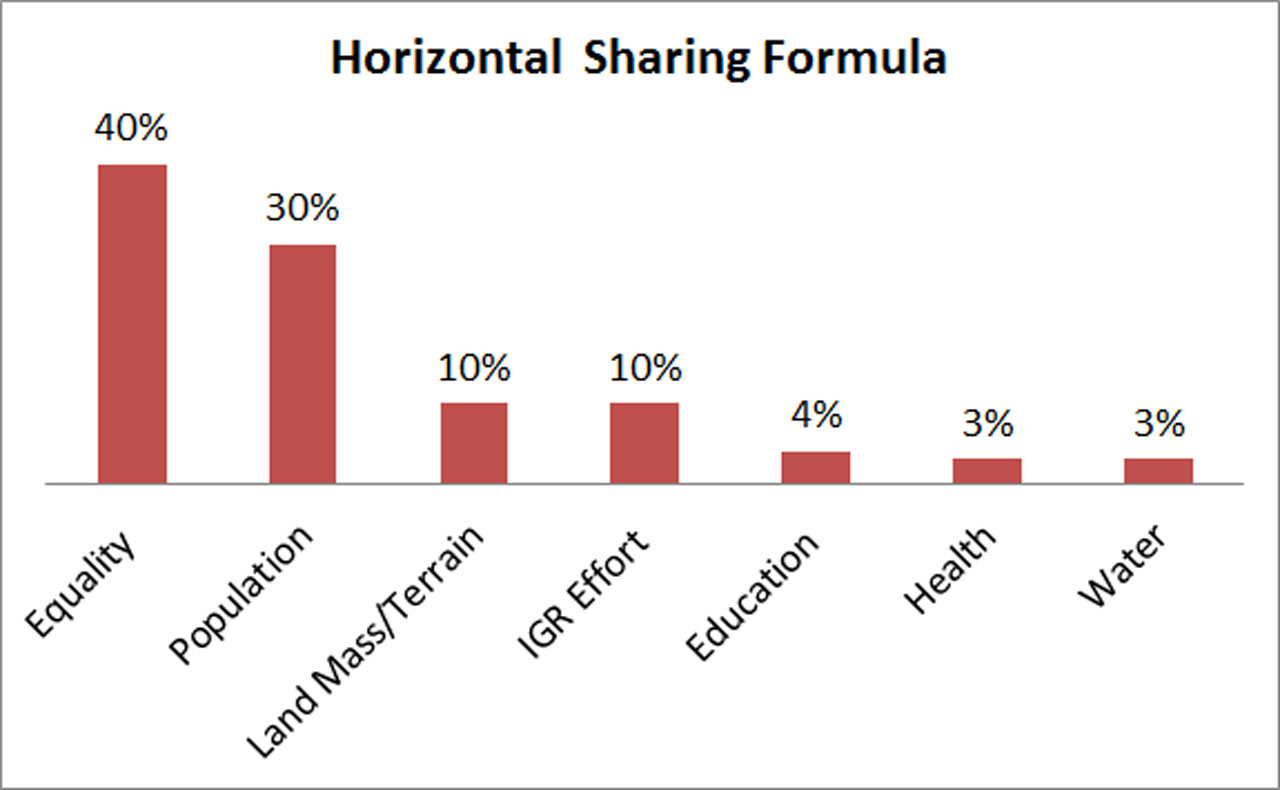 Insecurity has, in recent years, led to drift gravitation towards the south, with Lagos being the most attractive destination. The movement has caused some tension, especially in the destination, with stakeholders in Lagos raising concern about the consequences of the cost of maintaining public infrastructure.

Sadly, the changes in the country’s population are not updated at the pace at which the socio-economic variables affecting migration are changing. Nigeria’s last census was conducted 15 years ago, and it was mired by controversies. Interestingly, the RMAFC relies on secondary data generated by the National Population Commission (NPC). These leave in the wake salient questions bordering on the credibility of data used to allocate common resources to states.

The population principle contemplates population as the ultimate measure of human needs while considering the necessity of the concept of social development as the major barometer for measuring welfare. That makes sense only in principle as the underpinning of the rationalisation is remarkably different from reality. Considering this, one could ask who needs more resources – between Lagos, where millions of young people fleeing the unsecured northeast, and Borno, which is being de-populated (though undocumented) as a result of raging terrorism?

Godwin Owoh, a professor of applied economics, said it was most uncharitable and unfair to continue to retain population as a parameter of revenue allocation. He said that population, as a variable, was too inconsistent to be used as a benchmark for revenue sharing among the states.

Perhaps, the 30 per cent weight allocated to the population as against four per cent and three per cent assigned to education and health respectively also raises a question about national priority. In any case, health and education are key components of social development factors, suggesting that these are overlapping parameters.

According to Owoh, resource allocation should be guided mainly by the generating capacity of the states.

“Use the historical data of the contributions of the states to determine their share of the national revenue. That will solve the problem, otherwise, no other allocation principle can be justified,” he said. 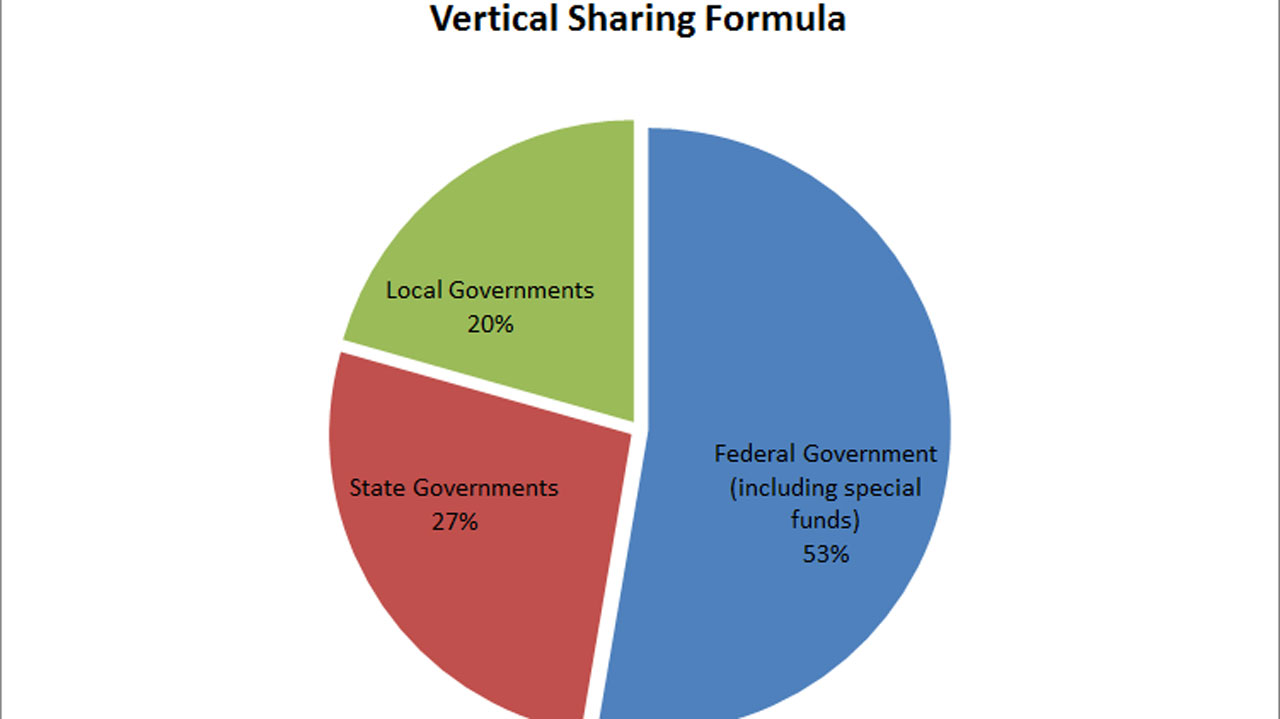 The closest principle to revenue generation capacity is the internally generated revenue (IGR), which does not imply what an individual state brings to the table. The overriding consideration of equality (which is assigned 40 per cent) and population does not suggest that the original concept of the revenue-sharing formula tends towards performance motivation.

Without pre-empting the outcome of the ongoing review, Prof Akpan Ekpo, a Nigerian economist, who consulted for RMAFC in 2014, said the organisation would likely use an objective-and-subjective approach. He said the weight assigned to different variables would depend on the inputs of relevant stakeholders.https://a95a235c8c7e286c91d20e5d11d06dfd.safeframe.googlesyndication.com/safeframe/1-0-38/html/container.htmlxhttps://a95a235c8c7e286c91d20e5d11d06dfd.safeframe.googlesyndication.com/safeframe/1-0-38/html/container.html

“We cannot say ab initio what they will come up with. It is a complex process; it is not as simple as people think. They will take inputs from all stakeholders. And the assigned weight will depend on the national need. Assuming we are going into war, it means the Federal Government will need more resources to buy equipment. Considerations, like this, will determine what is assigned to what or who,” the professor noted.

As important and urgent as the urge to rewrite the general principles of resource sharing among the constituents of the federation are, Owoh describes the current effort as unnecessary and a duplication of the equally ongoing constitutional review exercise. According to him, the resource-sharing formulae are a fundamental part of the contemplations of the proposed new constitution.

Indeed, Part 1, paragraph 32 (b) of the third schedule of the 1999 Constitution (as amended) empowers the RMAFC to periodically review the country’s sharing formulae and principles in line with changing political and economic realities.

One could hope that the struggle to rework the revenue-sharing formula, whether in isolation or as part of the constitutional review exercise, is carried out with dispatch and not as contentious as the previous attempts.

Presidency urges states on RoW for broadband deployment May 12, 2021

Nigeria needs $2b monthly for fiscal sustainability as FG builds oil reserves May 27, 2021